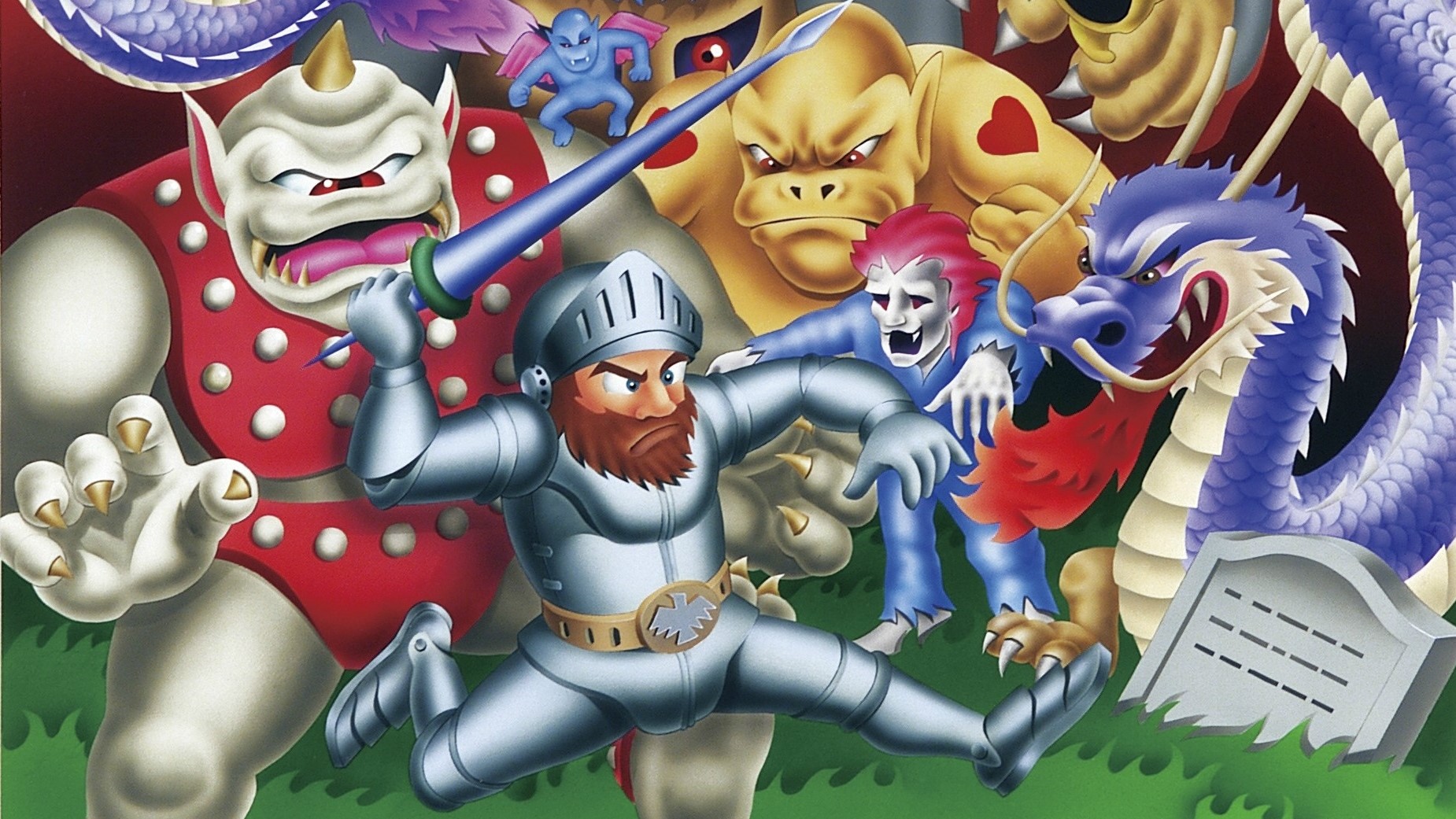 As glaring as their flaws are, PC ports have never been better than they are today. Most major console releases now make it to PC with significant upgrades, but that wasn’t always the case. The annals of PC gaming history are full of unpredictable, obscure, and hilariously failed console adaptations. Here are 10 particularly strange examples unearthed from the crypts.

Many have heard of the infamous PC version of Mega Man (opens in new tab) and the janky port of Street Fighter 2. Compared to Capcom’s DOS port of brutally badass arcade platformer Ghosts ‘n Goblins, they’re works of art.

Ported by the long-defunct Pacific Dataworks International, this is an EGA assault on the senses, with no scrolling, projectile sprites thrown backwards, stuttering movements, and an ear-piercing rendition of the game’s theme blasting through the PC speaker sounds. It can be considered a minor mercy that this version also doesn’t have the game’s infamous second loop, which cuts an entire playthrough down to under 10 minutes if you don’t make too many mistakes. That’s only nine and a half minutes longer than you want to spend on it.

In the mid-90s, a handful of Sega’s best Saturn games arrived on PC and in fine shape. It’s a shame nobody played them since they were exclusive to a single GPU chipset; the NV1, the debut product of a bold up-and-coming technology company called Nvidia.

The most famous NV1 card was the Diamond Edge 3D, one of the best-equipped and most expensive graphics cards of the time. It boasted a pair of Saturn controller ports and a built-in sound card. While the six NV1 ports were excellent (even mimicking the Saturn’s weird non-polygon rendering), most thought buying a regular GPU and a Saturn was cheaper.

Sometimes a game is just sent out into the cold to die. Cursed Mountain was a mediocre survival horror game for the Wii with a Tibetan mountaineering theme, and publisher Deep Silver also released a PC version. Tragically, it was released with no fanfare, no promotion, and little hope of survival.

Other than being a barebones port running at a locked (and frankly bizarre) 33fps, some of the Wii controller gimmicks didn’t neatly match mouse and keyboard. The final nail in its coffin was that it never made it to Steam. It was only available digitally on Gamersgate, but has since been removed.

There are plenty of questionable ports from PC strategy games to consoles, but few made it the other way. Hundred Swords was an obscure enough game on the Dreamcast despite coming from Jet Set Radio studio Smilebit. The PC version is almost entirely unknown, doomed to obscurity.

It was a quirky, fast-paced take on the standard RTS design, with players commanding squads rather than micromanaging individual units. Clever, considering it was streamlined for a controller with few buttons and only one analog stick. Hundred Swords was relatively well reviewed, despite a meandering soundtrack and forgettable steampunk fantasy setting.

Even at its home turf in arcades, running on custom hardware, Hologram Time Traveler was never good. Starring a cowboy shooting questionable stereotypes throughout time, it was a Dragon’s Lair-style FMV response test with the trick of running on a holographic projection screen, which mostly just made it more vague and difficult to play.

The PC port clearly lacked that gimmick, but went even worse: red/blue 3D glasses! Only the operation did not really work and gave people a headache. PC Gamer even reviewed this one on the day, giving it a damning 7% score. Best banished to a land that time forgot.

Sometimes less is more. At home on the Nintendo DS, Dementium 2 (originally from Renegade Kid) was a mediocre survival-horror FPS that looked and ran surprisingly well given the handheld system it was crammed into. About 70% clichés by weight, it featured haunted mental hospitals and a rusted, decaying “other world” to fight through.

Memetic Games’ PC port is closer to a remake, with vastly different aesthetics and controls. While perhaps a little easier to play, the grungy, decaying Silent Hill-esque environments of the DS original are completely stripped of personality. To be available on Steambut not recommended.

In the early ’90s, every cartoon property got tie-in games, no matter how inappropriate. One of the most baffling is Konami’s side-scrolling brawler version of The Simpsons, both for its very existence and for the fact that it was excellent. Marge working her way through Springfield with a vacuum cleaner was a delight.

Stranger still is that it never made it to consoles, but ended up on the Commodore 64 and DOS. Both versions are surprisingly good, with full two-player co-op and most of the game’s features scaled down respectably. While the arcade version’s vocal samples were missing, the PC soundtrack wasn’t bad either.

Here’s one that I have horrific childhood memories of. In the arcades of the time, Thunder Blade was an engineering marvel: a third-person/overhead helicopter shooter that switches perspectives with silky-smooth pseudo-3D sprite scale graphics. Great for 1987, and possibly cooler than After Burner.

Unsurprisingly, the PC adaptation I played was completely adrift, which is a bad situation for a helicopter. A stuttering, almost uncontrollable mess with hideous graphics, almost unrecognizable enemy sprites and some of the worst sounds ever to come out of a PC. speaker. The fake victory jingles when you managed to survive a stage were the best part.

I have a special place in my heart for Taito’s Ray series of shmups. Great music, cool mechanical boss designs and a great feeling of being in the middle of a huge galactic war. While these games got decent console adaptations, they were always better in arcades, with one odd exception.

Quietly released in Japan and even more confusingly as “Operation: Raystorm 2291” in Europe, the PC version of RayStorm is a direct port of the original arcade edition, with better audio, higher resolution graphics, and much faster load times than console editions. Sadly, it never made it to digital stores, and the 2010 remaster, RayStorm HD, remains a console exclusive.

You can’t get much more obscure than the ill-fated 3DO Interactive Multiplayer, a console that failed to find an audience. Captain Quazar was one of the flagships, a “crazy” isometric shooter about a square-jawed space agent fighting space crime in space. It’s kind of like Desert Strike, but more unpleasant.

Just a year after its release on the 3DO, it unceremoniously appeared on PC. Perhaps 3DO foresaw the end for their console and jettisoned this game, Superman-esque, to a strange new world hoping it would find a new home. Sadly, no one cared. PC Gamer UK awarded it a generous 40% score, and the only footage from the PC edition on YouTube is the clip you see above.

One of the best-known JRPG franchises of the 90s came to PC even before the Sega Saturn, and unlike most console ports of the time, Konami made a real effort to adapt it to Windows. The console’s UI has been omitted entirely, replaced by a clean (if generic) window layout, with separate mouse-friendly panels for the game display, dialog, character stats, and inventory.

As YouTube channel Import Gaming FTW breaks down in the video above, it’s not quite as pretty or as nice-sounding as the PlayStation original, but a shockingly good port for its time. Unfortunately, this one never made it outside Japan, but those of us who want to play Suikoden at its best won’t have long to wait. The first two games are getting beautiful remasters and they are coming straight to Steam in 2023.