Australia has introduced COVID-19 testing for travelers from China despite the country’s top medical official advising against the move, according to a recently released letter.

In a letter sent to Health Minister Mark Butler on Saturday, Australia’s Chief Medical Officer Paul Kelly said he did not believe there was a public health justification for introducing new travel requirements for arrivals from China .

Kelly said the high vaccination rate and previous infection in Australia, and the fact that the BF.7 Omicron subvariant that appeared to be causing cases in China was already circulating in the country, among other things, meant there were not “sufficient public health reasons” goods. for new travel rules.

There was a “strong consensus” among health officials in the Australian states and New Zealand that restrictions on travel from China “would be inconsistent with the current national approach to managing COVID-19 and disproportionate to the risk “, he said.

Kelly advised that, in lieu of travel restrictions, the government consider expanding wastewater testing, introducing voluntary sampling for international arrivals and improving follow-up of people who test positive for COVID-19 and a recent history of overseas travel have. 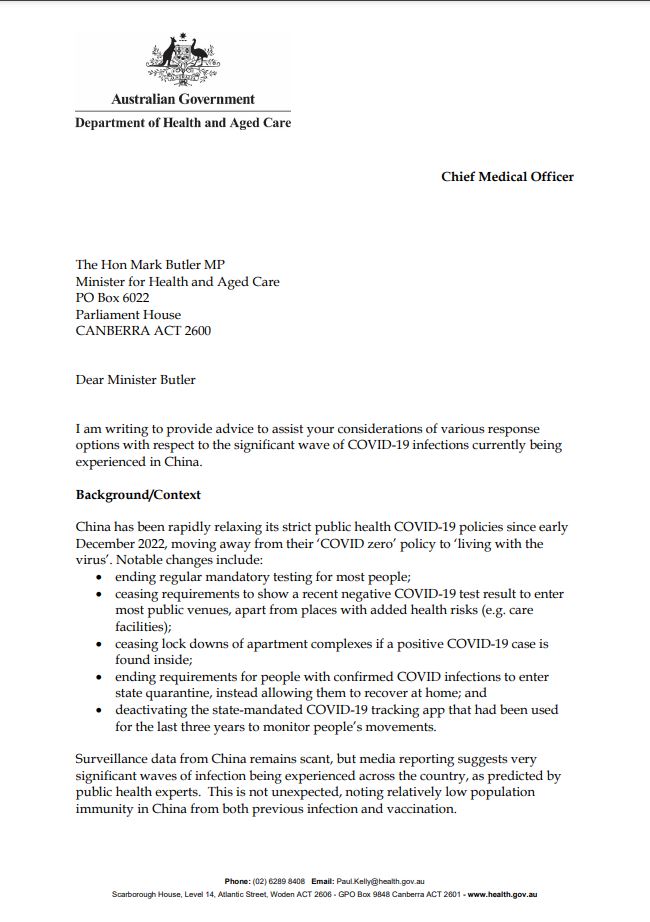 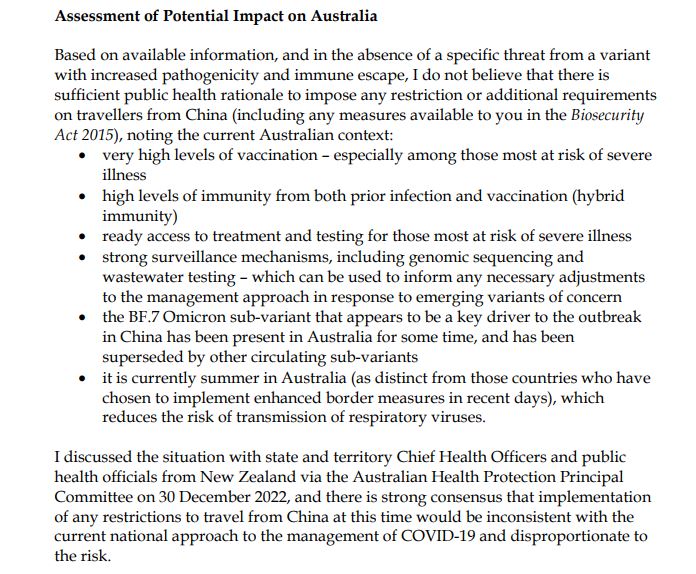 Despite the advice, Butler announced the following day that travelers from China, including Hong Kong and Macau, would be required to submit a negative COVID result within 48 hours of travel.

Butler said he made the decision “out of an abundance of caution, considering the dynamic and evolving situation in China and the potential for new variants to emerge in a high transmission environment.”

Butler said at the time that he was “extensively briefed” by Kelly, but did not go into details about the nature of the advice he received. Butler has since defended the measures as “very modest” and a “balanced decision”.

Kelly’s letter to Butler was published late Monday evening on the Australian Department of Health and Aged Care website.

Canada also announced on Saturday that it will begin testing arrivals from China from January 5.

Authorities have raised concerns that the rising number of cases in China following Beijing’s dismantling of its harsh “zero-COVID” policy could lead to the emergence of new and more dangerous variants.

Some health experts have criticized the testing requirements, arguing they will do little to stop the spread of new variants and risk xenophobia.

China has criticized the testing rules as “unnecessary”, while Chinese state media has labeled the measures “unfounded” and “discriminatory”.

China will lift mandatory quarantine for arrivals from January 8 after three years of strict border controls, but will continue to subject all arrivals to COVID testing.