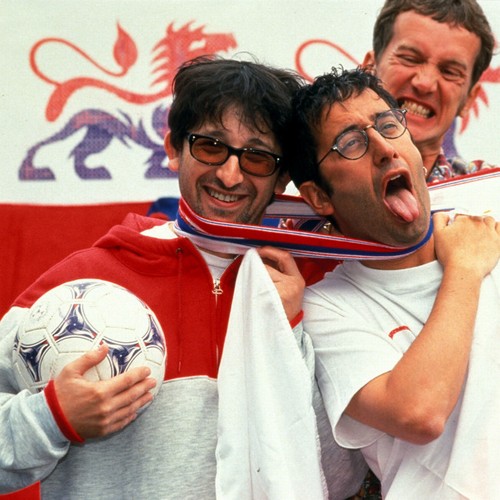 Frank Skinner and David Baddiel cheer on the Lionesses during their celebratory rendition of their 1996 football anthem “Three Lions.”

The 58-year-old comedian and his former ‘Fantasy Football’ co-host have once again teamed up with the Lightning Seeds on the new version of the football tune – first released for the Euro 96 tournament before being reworked for the World Cup in 1998 – and wanted the fact that this year’s World Cup is happening much later in the year by adding some festive sounds.

The lyrics to ‘Three Lions (It’s Coming Home For Christmas)’ have also been “updated” to reflect the England women’s football team’s historic victory in the Euros tournament over the summer.

Baddiel quipped, “Finally it’s between me and Mariah Carey who really is the voice of Christmas.”

Skinner added: “We just had to do it. Christmas World Cup songs are not like buses. If we had missed this opportunity, it would have been a very long wait for the next one.”

Baddiel joked that he appears to be Santa’s doppelgänger in the music video where they see the same house they filmed for the original almost 30 years ago.

He told the i-newspaper: “We visit the old house, where we shot the 1996 video, but we were young then,” he says. “And now it’s me with a beard and a Christmas sweater. And yes, I do look like Santa Claus.”

Baddiel is stunned that this year’s World Cup, which kicks off on Sunday (20.11.22), will be hosted in Qatar.

A witty verse reads: “When they decided on Qatar / Should have checked VAR / It’s too hot and too far / So there will be snowflakes watching it here.”

And if England make it to the final, he admits it will play on his “conscience” if he attends.

He commented on the controversial choice of the host city: “It’s really bad. It’s actually amazing that we’ve allowed this to happen internationally… So if someone says to me ‘Oh, England are in the final – do you want to fly over?’ then I’m going to have to deal with my own conscience.’