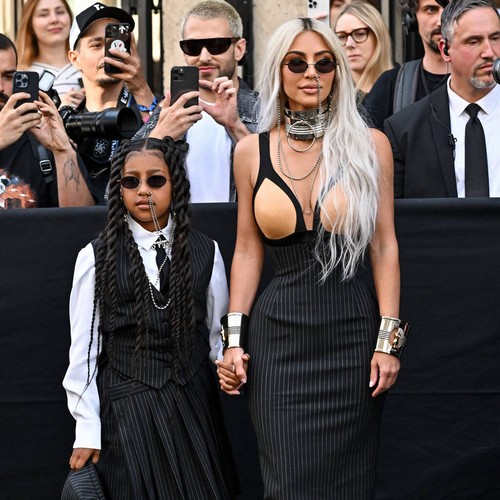 Kim Kardashian and her ex-husband Kanye West have issued a rule for their nine-year-old daughter North to use social media.

The rapper Stronger publicly voiced his grievances earlier this year about North being on TikTok “against (his) will” and Kim responded by insisting that North, the eldest of their four children, was always supervised by a adult.

Speaking to Gwyneth Paltrow on The goop Podcast on Tuesday, Kim revealed that she and Kanye have a rule about North’s social media presence.

“I made a rule with their dad about it, you know, he’s not happy about that, I respect that,” she shared. “It can only be on my own phone. It’s not somewhere where she can scroll and look at things… We don’t do comments.”

The 42-year-old revealed that she sees their joint TikTok account, which has nearly 12 million followers, as North’s “creative outlet” as it gives her a platform to create mini-movies and show off her makeup talent with special effects. .

“I think of it more as something creative, as long as it’s age appropriate and they’re having fun. It’s so annoying because I just won’t have my phone that long because she’ll grab it and do that,” Kim commented. “It’s something she (North and her friends) like to do and as long as they’re monitored, I’m fine with that.”

The SKIMS founder also told Gwyneth that North briefly had an Instagram account for their dogs, but it didn’t work out.

“That didn’t work for me. I was like, ‘This is just too much access,’ so that only lasted two days,” she added.

Later in the discussion, Kim revealed that she and North make a quick TikTok video every morning before breakfast.

Kim and Kanye finalized their divorce in November.