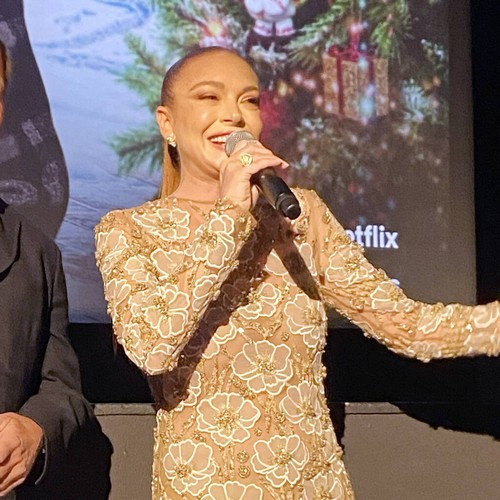 Lindsay Lohan is open to the idea of ​​making new music.

The Mean Girls actress released her debut album Speak in 2004 and followed with A Little More Personal (Raw) the following year.

After taking a break from the industry, Lindsay revealed the single Back to Me in 2020, and in an interview for Who What Wear, the star indicated that she has a number of songs ready waiting for release.

“I slowed down singing because singing is my sister’s biggest passion in life, and I really wanted her to follow that path and didn’t want to get distracted from that at all,” she shared. “I’ve made a lot of songs that are waiting. Maybe in five years I’ll do another album.”

And while Lindsay’s plans to record music are way off, she’s open to the idea of ​​showcasing her vocal skills in a musical.

“If you hear music from me, hopefully it will be in a movie musical,” the 36-year-old continued.

Lindsay is currently promoting her festive Netflix movie Falling for Christmas and working on a new rom-com titled Irish Wish.

However, she has also set her sights on starring in a superhero movie.

“The one thing I haven’t done and would really like to do is enter the Marvel Cinematic Universe. That’s my dream,” she smiled.