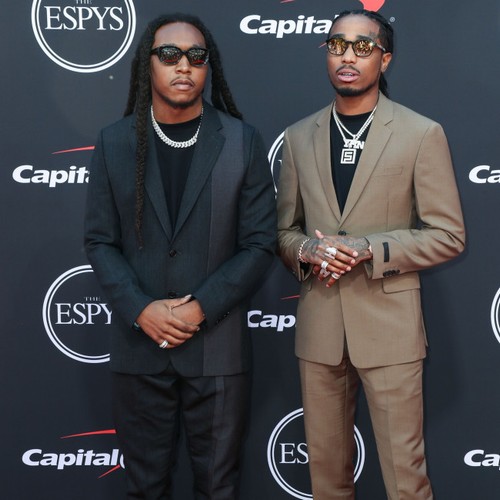 Quavo has paid tribute to the late Takeoff with the touching song ‘Without You’.

The Migos star was tragically shot dead in November at the age of 28 after an altercation at a Houston club.

And his bandmate and uncle Quavo, 31, has shared the emotional new track in memory.

He sings, “Wish I had a time machine / So you can take me for a ride / I miss how you smile at me / Unc and Phew to infinity.”

Quavo admitted that he will “miss” his cousin so much because they did everything together.

He wrote on Instagram, “It’s so hard to tell you I miss you because of you [were] always with me and we did everything together. I thought we were going to be professional wrestlers. Nothing really bothered Take and he didn’t bother anyone. He is the most undisturbed person in the world. He never went crazy, he never raised his voice, and when he did he silenced the room because what Take said was law and he didn’t change his mind.

The ‘Open it Up’ star – whose real name is Quavious Keyate Marshall – admitted the pair were closer than uncle and cousin, calling Takeoff “our angel”.

He said, “All the time I’ve been trying to find out what you really are to me, because cousin wasn’t. We hated that word “cousin” or when they said “Unc and Phew” because we always knew we were closer than that and it made me feel old too. But I knew you weren’t my brother, because you’re my sister’s son, so I couldn’t say brother. Now I finally get it…you are OUR angel”(sic)