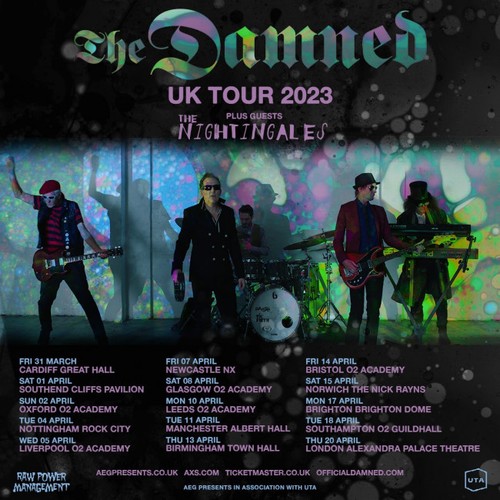 The Damned have announced a UK tour for 2023.

The rock band – which formed in 1976 and currently consists of vocalist Dave Vanian, guitarist Captain Sensible, bassist Paul Gray, keyboardist Monty Oxymoron and new drummer Will Glanville Taylor in place of original member Pinch – will once again take the stage in support of an upcoming album with special guests The Nightingales following the success of their original line-up tour earlier this year and the release of film/album ‘A Night Of A Thousand Vampires’.

In a tweet, the band said: “We’ll be touring the UK next spring with special guests The Nightingales. Tickets go on sale at 10am on Thursday!”

The ‘Smash it Up’ rockers open their March tour at the Great Hall in Cardiff, performing a total of 15 shows across the country, before concluding at London’s Alexandra Palace Theatre.

Tickets go on sale at 10am on Thursday 24 November at https://www.aegpresents.co.uk/events/detail/the-damned-7?cid=AEGPRESUK_damned_tour_SOCIAL_artist_22112022_OGNC_.

Watch a teaser trailer for the tour at https://www.youtube.com/watch?v=G2XUPKd7d58